Motor Oils: How to Pick the Best Engine Oil for Your Car?

Most car owners pay attention to their vehicle only when there is a check engine light on, or a loud noise or smoke is coming out from the parts. Though not every car owner can be enthusiastic about the intricate working of the machine, it is, nevertheless, important for all to keep the machine lubricated enough to function efficiently. As we know, without enough lubrication, the friction can lead to heavy bills.

With modern technology and the consciousness to save more of the environment and make vehicles more efficient, it is crucial, more than ever, to choose the best engine oil for your car. Minimum emissions and the regulations of efficiency has made us all aware of the impending doom and here’s how you can do your part as a car owner.

Before we get into ‘which engine oil is the best for my car’ questions, there are some factors you need to consider.

A manual check – The first step

Before making any decision about the type of Motor Oil, it is important to check the manual or manufacturer guide for your car. More often than not, the motor oil recommendation and specifications are clearly mentioned, which makes it easier to choose an oil, based on the expert’s opinion. The vehicle manual mentions the viscosity and the performance/efficiency that the oil should meet.

There are other factors that you should keep in mind while choosing the ideal motor oil, which we will be discussing, but the shortest way is to look for the manufacturer’s recommendation. 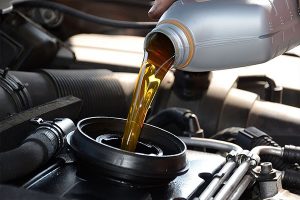 The ACEA Oil Standard makes use of a letter and a number to determine the quality. For example, A1, B3, etc.

The letters indicate the following –

A – is for petrol engines

B – is for diesel engines in personal cars

E – is for commercial trucks & vehicles

The SAE oil standard is used to represent the oil’s viscosity. You may have noticed that many of these engine oil containers have a mark somewhat in this format – XXWXX. The number to the left of W indicates it’s low-temperature viscosity, while the number of the right symbolises high-temperature performance. This is explained further in the next section.

The API oil standard is used to determine the engine oil based on their many qualities including their protection against wear & tear, oxidation, corrosion, dispersive & detergent powers, etc.

It makes use of two letters S & C, with S indicating petrol engines while C is for diesel engines. The second letter is then used to determine the performance, and further along with the letter, the higher the quality of the oil.

For example, SL will have a better performance than SE.

Now that you know all the standards, let’s move on to Viscosity.

What is Viscosity & why is it so important?

When choosing the best engine oil, it is very important to understand the concept of viscosity.

To put simply, Viscosity is the fluid’s resistance to flow. For example, water flows more easily than honey, which means honey has a higher viscosity than water. You get the drill, the higher the viscosity, the greater is the resistance to flow. Viscosity is one of the most crucial factors to be considered when looking for engine oil as each engine is built to use a motor oil of specific viscosity. 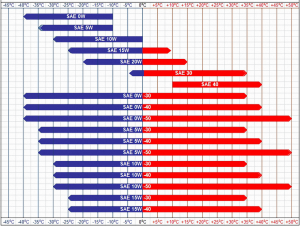 As the heat increases, the Motor oil tends to get thinner, and as the temperature drops, it thickens. To maintain the balance, the oil should be thick enough to lubricate the parts to keep them functioning, but not too thick to be unable to move around. It is important to maintain the harmony between the flow of the engine oil, and the smooth and efficient working of the parts.

Oil manufacturers use the right kind of additives to avoid it thinning too much in the heat, and therefore, oil rating can differ when rated for cold and hot viscosity. Moreover, if the weather condition is too cold, you would need an oil that does not thicken too much in the cold as it won’t be able to circulate throughout the engine. It needs to be resistant to thickening, as excessive thinking would make it very difficult to even start the engine, let alone function properly.

I hope you understood why it is so important to choose the best engine oil with the correct viscosity. 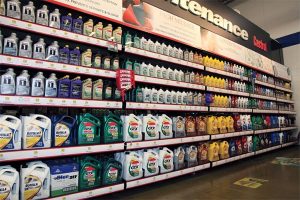 Even though it is highly recommended, it is important to change the oil and filters regularly to keep it in the best efficiency. Most brands will allow you to go between 3,000-5,000 miles between oil changes. Make sure you bring your car to the garage to get the oil changes at least twice a year.

Full Synthetic Oil is used for heavy-duty vehicles, high-tech engines, and high-performance vehicles. They are designed and tested for superior, long-lasting performance, which includes viscosity and other performance indexes. The synthetic additives allow it to flow better at low temperature and reach the highest viscosity during higher temperatures.

Remember that it is intended for engines with higher RPM limits, higher temperatures, and the ones that carry heavy loads.

A synthetic blend stands between the conventional motor oil and a fully synthetic one. They are generally used to increase performance and provide greater protection than conventional oil. This makes them less volatile, and less susceptible to evaporating, thereby reducing the oil loss and improving fuel economy. Synthetic blend is much cheaper than the full synthetic oil type, but includes some of the major benefits of the later types, making it preferred by many drivers of SUVs, pick ups, and other high-performing engines.

As the name suggests, the motor oil is intended for vehicles that have more than 75,000 miles on the engine. You can imagine that these vehicles must be old and have operating issues. The oil is designed with additives taking these issues into account, and addressing them.

This brings us to the end of the guide to choose the best engine oil for your car. You have to keep the viscosity in mind, and the different types of oils before making a decision. It also depends on the type of vehicle and the type of driving and compatibility that you’re looking for.

If you’ve any questions or doubts, feel free to comment below.