Imagine going for a long drive, and every bump on the road sends the car flying in the air and then coming back with a thud. Sounds pretty unpleasant, doesn’t it?

That’s where your suspension system comes into play. If you are curious and keep asking what is car suspension, this guide is made just for you.

What is the function of a car suspension system? 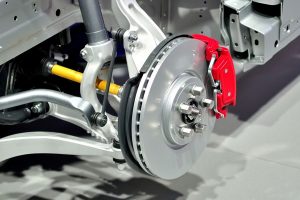 Before we answer what is car suspension, let’s have a look at its main functions- Absorbing shock and keeping the wheel on the ground.

If your suspension system was absent, every small pebble and bump of the road would affect your car, and it would prove to be the most uncomfortable ride for everyone. I am simplifying this to make sure you understand the most basic function of the suspension system.

Apart from absorbing the friction, gravitation, and impact forces from the ground, it also helps to keep the tyres in contact with the road surface.

What is Car Suspension – how it works? 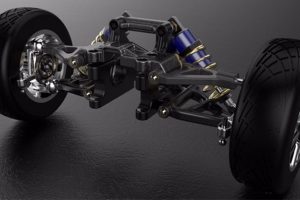 As explained previously, we already know what is the function of the car suspension system. But here, we look at how it works.

The modern car suspension system is smartly designed with every wheel and axle being independently suspended. This means if one of the wheels is off the ground, the other three will stay put. This is known as the independent suspension.

If each wheel did not have their own suspension system, then when one wheel was raised, the other wheel on the same side would also rise which can lead the car to flip over. This is known as the dependent car suspension system.

Now coming to address your question of what is car suspension, here we understand the dependent system. Though not commonly used in newer vehicles, you may find this design in off-road cars or older vehicles. This system, known as the beam axle design has two different axles; live and dead. The live axle is used when there is a power-steering, while the dead axles take care of the free-spinning tyres.

This design has two major problems. First, is that the tyres will be moving dependent on one another. This will shift the focus of the tyres to maintain the same angle relative to each other, rather than keeping the wheels on the ground. The traction in the tyres will make it difficult to handle the car.

The second problem stems from the fact that this design leads to an increase in the unsprung weight or the weight that is not supported by the car suspension system. This additional weight leads to added pressure on the beam suspension system, thereby, increasing the vibration, bounce, and friction. It may also lead to loss of wheel control while accelerating or braking.

Independent Suspension is largely used in the now-manufactured modern cars. The independent design helps each wheel to individually travel, and come up and down with the shock absorbers and spring bolted to one end of the frame.

Your car may use a wishbone or a control arm to connect to the suspension. The front-wheel independent system is responsible for the wheel alignment and the complete control of the tyres. The rear wheels have the same connection and parts, minus the steering dynamics.

How does the suspension system help the car stay connected to the road? 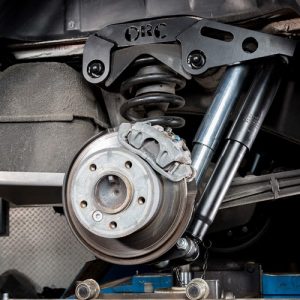 You’re aware of what is car suspension, but do you know it also helps to keep the wheel connected to the ground, ensuring the car doesn’t do somersaults. This capability also proves useful while maintaining good traction and weight distribution when presented with some force.

For example: when you are accelerating, you don’t want to be jerked backwards. The rear suspension should work to ensure you’re comfortably seated. Similarly, when pressing the brakes, you don’t want to dive head-first into the dashboard. This is also true when the car is turned at a very high-speed. If the weight of the vehicle is shifted to one side, while it is turning, you can imagine what will happen. This is known as body roll, and it is the job of the suspension system to keep the inside tyres from flying off.

Here are some traction problems that are commonly associated with the suspension system arrangement:

Bump Steer: This usually happens when the car hits a bump, and the car is directed left or right without the driver turning the wheel. This is the evidence of a poorly aligned suspension system.

Oversteer: Oversteering is when the rear of your car loses traction, which sends it spinning with the tail of the car forward. Somewhat similar to drifting, though is unintentional and is quite risky.

Understeer: It is the opposite of oversteer, and where the car loses the traction of the front wheels, sending the vehicle way outside the turn. When the front wheel loses contact with the ground, it implies significant safety concern for the passengers and driver.

The parts of the car suspension system 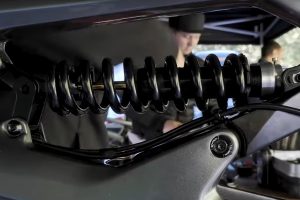 Let’s have a look at the parts of the car suspension system which keeps our car running comfortably and without any bumps.

Springs are naturally an important part of the suspension system as it absorbs the irregularities of the road and also takes care of any additional weight on the vehicle. The springs are also responsible for keeping the car at a predetermined height.

There are 3 types of springs used in the suspension system namely, coil springs, leaf springs, and torsion bars.

These are usually found in luxury cars, buses, and trucks as it allows a smoother functioning and a comfortable ride. The air springs are powered by air compressors which use the abilities of the air compression to reduce the shock and vibration.

If you have ever played with a spring that comes from a pen, when you press and release it, the spring bounces twice or thrice before it comes to a complete stop. This is where Dampers come into play. It helps to dissipate or control the up and down energy, which is also the purpose of the shock absorber, strut, and anti-sway bars.

The work of the shock-absorber is intimately related to dampers, but their functioning is different from each other.

The absorbers are oil-filled cylinders that make the suspension compress and decompress at a regulated rate. This, in turn, prevents the bouncing of the springs.

Modern shock absorbers (or shocks) are velocity-sensitive, meaning they are smoother when dealing with light bumps and put up more resistance to big bumps.

Here we come to the end of our car suspension guide. Hope your question of what is car suspension is accurately answered. Stay tuned for more interesting blogs on car mechanisms, latest automobile news, and much more!