The intricate working of a vehicle might be interesting to some while utterly confusing to others. From the multiple coloured wires to the number of automobile oils, for the curious minds, it becomes a task to understand how everything works.

In reality, once you understand how things work, it becomes infinitely easier to take care of and maintain your precious machine. In this article, we are talking about another type of engine that has made its mark in the vehicle domain.

Rotary Engine takes a step back from the conventional type of engine, the heart of any vehicle, and brings about a different mechanism which aims at making things more efficient. Introduced and highly used during World War 1, the rotary engine went out of fashion in the 1920s. However, with modern technology and much capable car brands, many companies are accepting the challenge to make a completely functional rotary engine that would last for a long-time.

Before I start explaining how a rotary engine works, let’s take a look at the conventional pistol style engine and its working.

How does Piston Engine Work?

A normal combustion engine comprises pistons, that work in a linear movement inside the cylinders. The pistons are attached to a crankshaft with the help of a connecting rod. As the piston moves up and down, its connection with the crankshaft makes the shaft rotate. This rotation ultimately reaches the gearbox, and through them, to the wheels, allowing the vehicle to move forward. 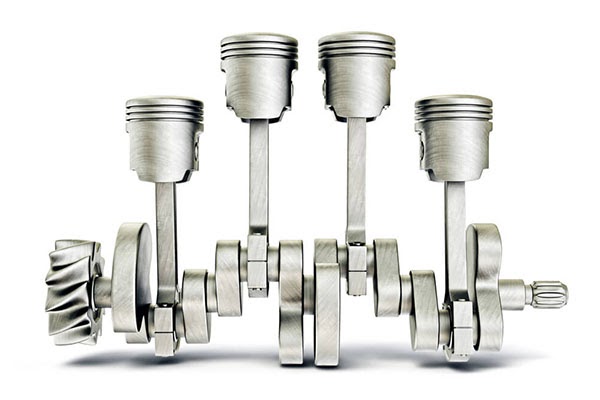 Mirroring the crankshaft, there is a combustion chamber with valves that allows fuel and air to enter, and the unrequired gasses to move out. As the piston moves up, it compresses the explosive air/fuel mixture which then ignites the spark plug. The explosion causes the piston to move downward, thereby inducing a rotational movement at the crank, that ultimately reaches the wheels.

Now that you know how a normal piston engine works, let’s move on to the bigger question – How does a Rotary Engine Work?

| Also Read: Motor Oils: How to Pick the Best Engine Oil for Your Car? |

What is a Rotary Engine and How does it work?

The Rotary Engine was a brilliant invention, though a little unusual. It makes use of the same principles of combustion but employs it in a completely different way. The barrel-shaped engine, however, lacks the majority of the parts that you’d usually find in the conventional engine.

As we mentioned earlier, in a conventional engine, the pressure is held in the cylinders which ultimately pushes the piston to move back and forth. In the rotary engine, the same combustion pressure finds home in a rotor, the triangular chamber that the engine uses instead of pistons. So instead of pistons chugging up and down, the unconventional engine uses one, two, or sometimes three triangular rotors. 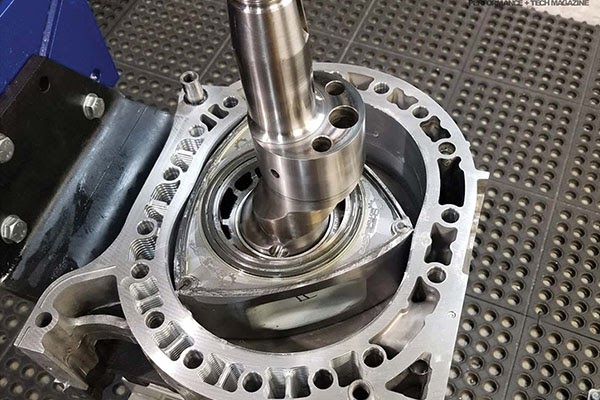 As with the conventional engines, fuel and air are pumped into the engine, but they, however, make space on the rotors’ sides and interior walls of the barrel. As the fuel and air are igniting in the chamber, the expansion of the gasses makes the rotors turn. This helps to generate the power needed by the engine to make the wheels move forward.

To make the working more clear, let’s take a closer look at the principle of the rotary engine.

Where the cylinders are placed in a conventional engine, the rotary engine has housings, within which the triangular rotors are contained. Attached to an eccentric shaft, these rotors remain in contact with the housing at all times as it spins. The design of the rotor and housing is such that there is a void created which expands and contracts, based on the position of the rotor. Each of these voids is directed to take care of one aspect of the combustion cycle.

As the rotor turns it compresses the mixture, expands the chamber again as it ignites, then squeezes the exhaust gasses out of the exhaust port. 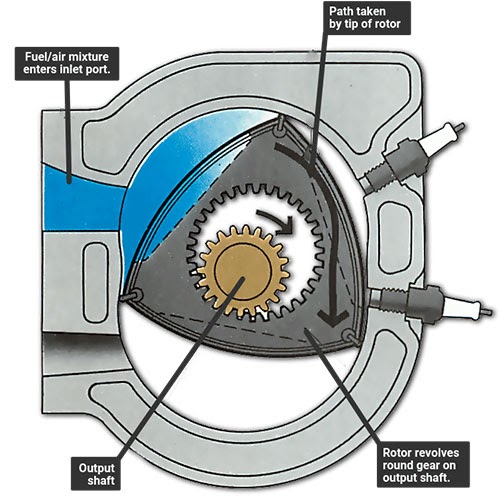 Felix Wankel, the German Engineer, was the mastermind behind the very efficient and power-saving prototype of the rotary engine. In the 1920s, the engineer worked well with developing his vision, but owing to the war, couldn’t develop his vision far, until 1951 when he was invited by the German automaker NSU to come up with a prototype.

Soon another engineer, Hanns Dieter Paschke, whom NSU had also invited to take a crack at Wankel’s original concept, designed a simple prototype for the Rotary engine, which came to be employed in Mazda in the 21st century.

The rotary engine gained popularity owing to its lower number of components but with the same process as a conventional engine. The absence of valves, timing gears, con-rods, piston, crankshaft makes things considerably lighter and cheaper. Only three main moving parts comprise the entire engine and work pretty well when compared to the ‘normal’ one.

| Also Read: How Does a Car Brake System Work? |

Parts of a Rotary Engine

You are aware of how a rotary engine works, let’s now take a look at the different parts of the rotary engine to gain a better view.

A general rotary engine comprises an ignition system and a fuel-delivery system, quite similar to that of the piston engines. However, there are a few parts that are so different from the conventional engine that it makes even the most avid car lovers scratch their head in confusion. 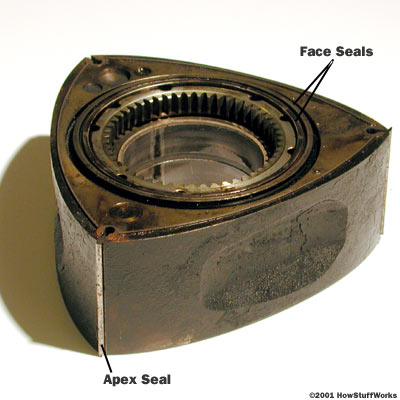 The rotor is the main MVP of the engine, generally compared to the piston in the ‘normal’ engine. Triangular in shape, it has three convex faces with each having a pocket in them, allowing the pressure and space for air/fuel mixture.

At the top of each of the convex faces, there is a metal blade designed to fix the rotor to the outside of the combustion chamber. The metal rings on each side of the rotor also assist in sealing the component to the sides of the chamber.

Apart from this, the rotor also comprises a set of internal gear teeth, carved on to the centre of one side. These teeth are used to affix it to the gear found in the housing. It is a crucial matter since this connection decides the route the rotor will take through the housing. 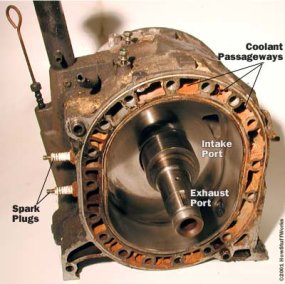 After the rotor, comes the housing which makes for an important part of the rotor engine. It features an epitrochoid shape, also known as an oval shape, which is designed such that the tips of the rotor are always in touch with the walls of the chamber. The housing is extremely crucial as each part of it is employed to complete one part of the combustion process which includes Intake, Compression, Combustion, and Exhaust.

The intake and exhaust ports are located in the housing, however, there are no valves in these ports. The exhaust port makes direct contact with the exhaust, and the intake port connects directly to the throttle.

After the rotor and housing, comes the output shaft.

The output shaft contains round lobes which are mounted in an offset manner, that is, slightly off from the centre of the shaft. The rotors are designed to fit over these lobes, similar to that of the crankshaft in the piston engine.

When the rotor moves, it pushes back on the lobes, which creates a torque in the shaft, causing it to rotate.

| Also Read: Diesel Particulate Filter: What is a DPF in a Car? |

How does the Rotary Engine produce power?

In a conventional engine, there is the concept of the four-stroke piston which is used to power the heart of the machine. Similarly, the rotary engine makes use of the four-stroke combustion cycle which gets the same work done in a different manner.

The rotor, also known as the heart of the engine, is placed on a circular lobe on the output shaft. As we discussed, the lobe is unusually placed shaft, which allows the rotor to rotate the output shaft. When the rotor completes a rotation inside the housing, it drives the lobe in circles, turning three times for every one revolution of the rotor.

When the rotor is circling inside the housing, the chambers that were produced by the rotor change in size, which induces a similar action to that of pumping.

Let’s take it step-by-step to understand the powering of the rotary engine better.

The intake phase of the rotary engine starts when the tip of the rotor brushes the intake port.

This makes the intake port revealed to the chamber. At this moment, the volume of the chamber is at a minimum.

As the rotor passes through the intake port, the volume of the chamber increases, thereby taking in the air/fuel mixture into itself.

As the peak point of the rotor passes, the chamber is sealed off, and the compression is initiated.

At this stage, the rotor maintains its circular motion around the housing, which again induces the chamber to get smaller. This makes the air/fuel mixture get compressed.

When the face of the rotor makes it around the spark plugs, the volume of the chamber reaches a minimum again. This induces the combustion process.

Rotary engines are equipped with two spark plugs. Since the combustion chamber is pretty long, two spark plugs are required to spread the flame. As the spark plug ignites the air/fuel blend, the building pressure pushes the rotor to move further.

As the rotor marches on, the volume of the chamber grows. The combustion gasses keep expanding, pushing the rotor, initiating power until the rotor comes across the exhaust port. 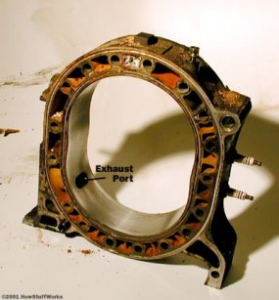 Once the peak of the rotor passes through the exhaust port, the high-pressure combustion gases are free to flow out the exhaust. The rotor keeps moving ahead, which contracts the chamber, pushing the remaining exhaust out of the port.

When the volume of the chamber approaches the minimum side, the rotor passes through the intake port, starting the entire process over again. The interesting take here is that the rotor is always functioning in one part of the cycle, which means that in a complete revolution, there are three combustion strokes.